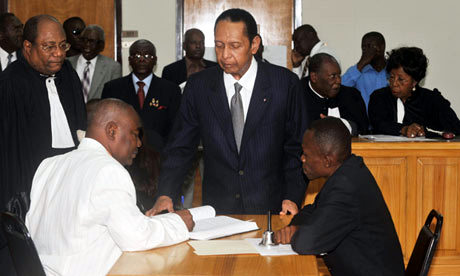 Former Haitian dictator Jean-Claude "Baby Doc" Duvalier appeared in court on Thursday for the first time to face charges he was responsible for corruption and serious human rights violations during his 15-year rule.


Duvalier boycotted three previous court hearings, and a judge responded to his last failure to appear a week ago by issuing a warrant ordering prosecutors to ensure his presence, under police escort if necessary. Hundreds of Duvalier supporters gathered outside the courthouse.

It is the first time Duvalier has personally been obliged to address crimes allegedly committed during his 15-year rule.

The case is being closely watched by international human rights observers who consider it a landmark case for Haiti's weak justice system after decades of dictatorship, military rule and economic mayhem. "Duvalier got away with everything all his life, and now he's being forced to face his victims across a courtroom," said Reed Brody, a spokesman for Human Rights Watch. "It's a powerful message. This is the sort of thing that could restore Haitian faith that justice is possible."

Duvalier returned to the impoverished Caribbean nation in January 2011 after 25 years of exile in France and was briefly detained on charges of corruption, theft and misappropriation of funds that are still pending against him. Separate charges of crimes against humanity filed by alleged victims of wrongful imprisonment, forced disappearances and torture under Duvalier, were set aside by an investigating judge last year because the statute of limitations had run out. But the UN high commissioner for human rights, Navi Pillay, has warned Haitian authorities that there is no statute of limitations under international law for serious violations of human rights.

"I encourage the judicial authorities to act on their responsibilities and ensure the victims are provided with the long overdue justice they deserve," Pillay said in a statement last week.

Critics say prosecutors have been too lenient in Duvalier's case. President Michel Martelly's government recently renewed Duvalier's diplomatic passport, saying he was entitled to it as a former head of state.

Duvalier's flight into exile in 1986 ended nearly three decades of dictatorship begun by his father, François "Papa Doc" Duvalier. He is alleged to have fled with more than $100m stashed in European bank accounts.

The Duvaliers enforced their rule with the aid of a feared militia, the National Security Volunteers, better known as the "Tonton Macoutes", who were blamed for hundreds of deaths and disappearances.

Soon after he returned to Haiti in 2011, Duvalier issued a brief apology "to those countrymen who rightly feel they were victims of my government," the first public recognition of abuses under his rule.