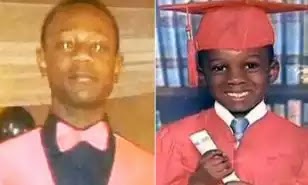 Boy, 14, shoots dead brother, 16, in fight about sharing clothes before taking his own life


Stanley Blanc, 16, and Stephen Odeus, 14, were arguing in their Florida apartment complex about sharing clothes on Sunday night
Stephen then pulled out a gun and shot his brother dead in the hallway before walking to a different part of the complex and killing himself
Their brother, Mark Blanc, witnessed the tragedy and said he believes his younger brother got the gun from a neighbor
Neighbors described the boys as 'inseparable'
Two teenage brothers have died in a heartbreaking murder-suicide after one shot the other dead before killing himself during an argument.

Stephen Odeus, 14, and his brother Stanley Blanc, 16, were arguing about sharing clothes in their apartment in Little Haiti, Florida at 11pm on Sunday when the fight escalated.

Their brother, 18-year-old Mark Blanc, said he broke up the fight but it flared up again moments later.

He then watched in horror as Stephen pulled out a gun and shot his brother once as they stood in the hallway. He said the younger boy then walked around the corner and shot himself dead.