From the balcony of her second-story Port-au-Prince apartment, Mary Ander had a particularly good view of former U.S. president Bill Clinton’s recent tour of Haiti’s soon-to-be-launched “Building Back Better Communities” housing expo, a Haitian Ministry of Tourism competition that will result in the contracting of hundreds of new housing units for Haiti’s post-earthquake reconstruction.
During an interview in the comfortable living room of her two-bedroom apartment in the Zoranger region, Ander exclaimed, “I love my house … I’m very, very happy.” Her apartment is part of an affordable-housing complex known as Village de la Renaissance, and overlooks the expo site that Clinton, along with Haiti’s newly inaugurated President Michel Martelly, visited last Wednesday.

According to Daniel Fauresmy, an engineer working with the housing expo, Ander’s building is resistant to the earthquakes and hurricanes that have devastated Haiti in recent years. The concrete building is also constructed with supplies manufactured in Haiti, something that Fauresmy emphasizes is important, as the “best solution is to work with local materials.”

However, Village de la Renaissance – whose construction began under the government of former Haitian president Jean-Bertrand Aristide in 2003, and was aborted when he was ousted in a U.S.-backed coup d’état in 2004 – is not one of the models being considered in the expo competition. Building Back Better Communities, which was one of the first projects of the reconstruction panel that Clinton co-chaired, and which the Clinton Foundation is backing, instead features many imported models. According to Fauresmy, among the 59 units on display, only seven are made by Haitian companies. Fauresmy estimates that, at most, 10 per cent of the models in the expo rely exclusively on local materials.

After his tour of the housing expo, Clinton gave an address beneath a large white tent lined with vendors (many of them American) selling assorted eco-products, from solar-powered flashlights to composting toilets. Standing beside Martelly (who sported a baseball cap with the word “Prezidan” embroidered on it for the occasion), Clinton emphasized Martelly’s campaign pledge to move quickly on building housing for the thousands of people still living in tent camps nearly 18 months after the earthquake.

The former U.S. president then praised Building Back Better Communities as evidence that, “if we do this housing properly, it will lead to whole new industries being started in Haiti, creating thousands and thousands of new jobs and permanent housing.”

Despite Clinton’s words, much about the expo was illustrative of what’s been done wrong thus far in Haiti’s reconstruction.

I first met Fauresmy outside one of the first housing units that Clinton visited – a small manufactured home being sold for $22,500 by a European conglomerate that had established a Haitian outfit called PMA. I had been trying to find out from the PMA sales reps how well the unit’s particleboard walls would stand up in the event of a hurricane. Had they been tested for resistance to strong winds, for instance? “Well no, we don’t do that,” I was told by one of the reps, Karl Sante. “They don’t have to be tested,” he added.

When I asked whether exhibitors were required to adhere to international building codes as a condition of participation, a Haitian employee of PMA helpfully telephoned Fauresmy, who he said would be able to answer my questions.

A young Haitian engineer at the Ministry of Tourism, Fauresmy agreed to show me around the expo. As we toured the various units, he confided in me that, in his opinion, a full half of the housing models on display would not withstand earthquakes or hurricanes. Walking around the expo site, the tall, soft-spoken government engineer pointed out specific units that he believed would likely be torn from their foundations, have their roofs torn off, or have their walls blown down in the event of a hurricane. 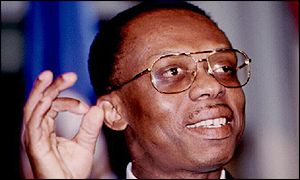 Another major problem that Fauresmy identified was that so many of the units relied on imported materials. Unemployment is a major problem in Haiti, so there is a desperate need for job creation, which is undermined by the outsourcing of reconstruction projects.

Moreover, with many of the units costing more than $20,000 or $30,000, the houses featured in the expo are unaffordable to ordinary Haitians, most of whom live on less than $2 a day.

When I asked Antoine Auguste, one of the expo organizers from the Haitian Ministry of Tourism, about this, he explained that the expo sought to offer “a wider variety” than the Aristide government’s affordable-housing project, which had provided rental units for $30/month. He added that “in the camps there are not just people who don’t have many resources, there are also middle-class people.” He was adamant, however, that there were “absolutely” options for the poor at Building Back Better Communities. As an example, he pointed to a unit comprised of a blue 12-foot-by-12-foot plastic box, which he claimed, at a cost of $1,500, would be affordable even to those living on less than $2 a day, if they took out a loan. (He explained that loans were “another part of the equation” of the rebuilding plan.)

When I spoke to the team that oversaw the manufacture of this option for the poor – a pair of young men from Arkansas clad in matching wraparound sunglasses and crew cuts – I found out that the plastic box actually cost $7,500.

One of the two, Chad Cauffman, who also ran a plastic-storage-box company, did not seem concerned that the housing unit, manufactured in Ohio out of polyurethane, would be out of reach for ordinary Haitians’ budgets. “Where we believe this money is gonna come from is foreign governments,” he explained. Cauffman added that he believed that the 12-foot-by-12-foot box (which he referred to as “a permanent house”) “is pretty much a step up from the way most Haitians live,” and that it could “house a family of four.”

The pair, which, at first glance, I nearly mistook for Clinton’s security detail, had come all the way to Haiti for the expo, and planned to fly back to the U.S. the following day. However, both of them said they had considerable experience in the country. They were missionaries, they explained – although Cauffman’s partner later confided in me that his first experience in Haiti was when he served as part of a covert U.S. military force during the Haitian military dictatorship of 1991 to 1994.


Participating in the expo had required a serious financial investment from the pair. “We had to donate this whole house,” explained Cauffman. “The shipping of all this down here, all the funds to build the house,” he added. “It’s a sizeable investment for all these companies.”

However, in light of the billions of dollars that foreign governments pledged for Haiti’s reconstruction after the Jan. 12, 2010 earthquake – much of which has still not been disbursed – they believed it was worth it. They’d heard from the Haitian government and the Clinton Foundation that the expo competition would be very important in awarding reconstruction contracts. “This was the competition that we’ve been told – for the reconstruction of Haiti – this is it,” explained Cauffman.

A small, but vocal, group of Haitians protested during Clinton and Martelly’s tour, holding signs and chanting slogans denouncing the high cost of living and the role of foreigners, and proclaiming their support for Aristide – to the evident disgust of the polyurethane-box-house vendors. “I can’t believe they let them do this,” Cauffman exclaimed about the presence of the protesters. One of the demonstrators later explained to me, “We need jobs.”

At the other end of the park, in an open-air amphitheatre, a handful of men from the community could be seen painting a giant mural of Jean-Bertrand Aristide. Looking out at the expo, one of them remarked, “No houses that Aristide built fell down in the earthquake, his houses were built solid.”

For Norestant Avenuse, Ander’s neighbour in Village de la Renaissance, what is most concerning is that the community has lost its park – a well-lit public space where, even after dusk, kids have always been able to do their homework. Avenuse is confounded at why the organizers decided to erect the expo on Village de la Renaissance’s sole public space.

The Clinton Foundation’s communications assistant looked faintly surprised when I asked her about the decision to hold the expo on top of the community park. “It was just an open space,” she said.